Romantic comedy
Kanojo, Okarishimasu (彼女、お借りします?, English: "Rent a Girlfriend") is a romantic comedy manga series written and drawn by Reiji Miyajima. The series began serialization in Weekly Shonen Magazine in merger issue No.32 on July, 2017 and has been compiled into 21 physical Japanese volumes as of June 2021.

The series received an anime adaptation annoucement on its one hundred and twenty-first chapter.

20-year-old college student Kazuya Kinoshita is feeling gloomy after his girlfriend dumped him for another guy. Tired of feeling alone, he decides to use the app "Diamond" to get himself a rental girlfriend.

When he meets Chizuru Mizuhara, he thinks he has finally found the perfect girl with everything he could possibly ask for. But is it really possible for things to get intimate between them when Chizuru is just a borrowed girlfriend?

In July of 2017, Reiji returned with his brand new work Kanojo, Okarishimasu that was published in Weekly Shounen Magazine's 32nd issue.

On December 25, 2019 the series was announced for an anime adaptation in Weekly Shounen Magazine's 4-5 issue.

The series has reached 2 million copies in print with 10 volumes out.

After the release of the anime, in August 2020, the series has reached 5 million copies in print.

Chapters not yet published in volume format 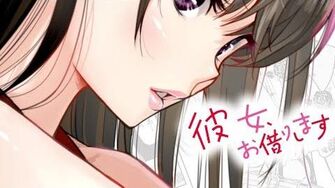 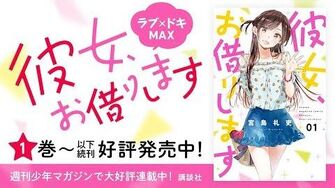